By Any Way You Want It Weddings & Events

This was the most fun party I've ever planned. The birthday girl was very clear that she loved Tinker Bell and Shrek, so I got to work trying to figure out how to combine the two. It all started with the invitation. 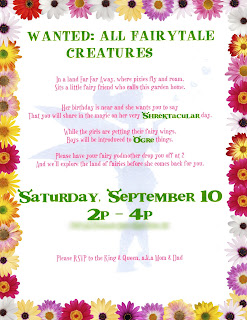 The "Shrek" font and the Tinker Bell watermark was the perfect way to pull the theme together. 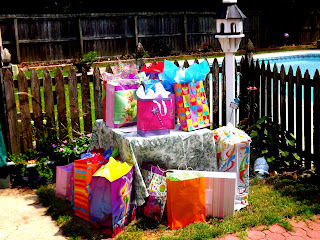 ﻿Guests entered the party at the gates to The Swamp (the pool) and dropped their gifts before getting their character costumes. Check out the KEEP OUT OF THE SWAMP sign below. 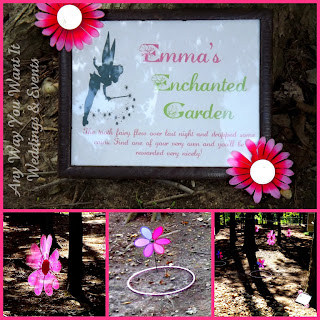 Each child searched Emma's Enchanted Garden for the coins dropped by the Tooth Fairy the night before. I purchased the frames from the Dollar Store, spray painted them and added the flowers and coins to tie in the theme to the frame. The Tooth Fairy's coins were scattered under the hanging flowers. The kids used hula hoops to play Fairy Ring Toss with the pinwheel flowers. 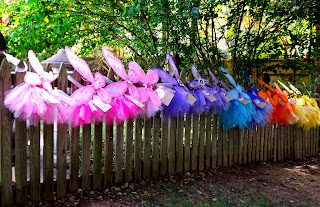 They used their Tooth Fairy coins to "purchase" their costumes. Each girl received fairy wings and a tutu custom made for them by Any Way You Want It Weddings & Events. 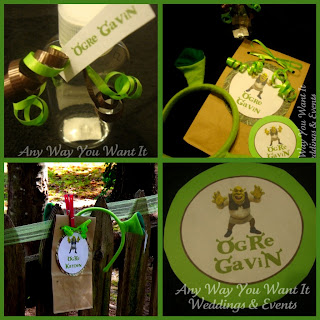 Each boy was given Shrek ears, for his very own Ogre costume. I found the ears on Amazon.com and they were adorable!

﻿After finding their Tooth Fairy coins and putting on their costumes, they ventured over to Tinker's Nook. 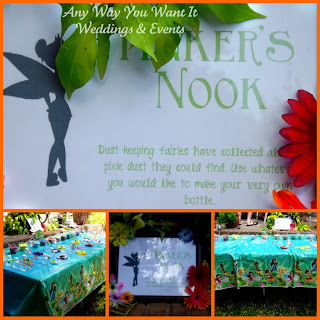 At Tinker's Nook, the fairies and ogres got a chance to make their very own fairy dust. They had 12 different kinds of dust to choose from, including Giggledust, Dream Dust, Ogre Toe Jam, and Wing Washing Dust. They were each given their own pixie dust bottle and the girls even got a their very own fairy, more on those later. 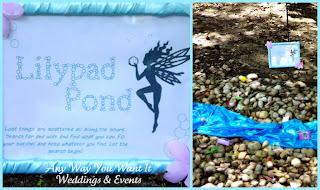 When the fairytale creatures finished making their pixie dust, they took a tour of Lilypad Pond to find lost things (party favors). They were able to keep whatever they found and used the favor bags that were custom made for each child. See more on the favor bags below. 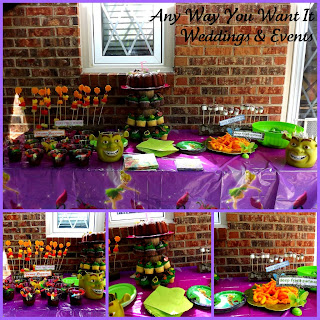 A wonderful friend of mine created the gorgeous cupcake tree and the logs to display all of the kabobs. He did such a great job!! The cupcakes were delicous and I found the Shrek and Tinker Bell themed ring toppers on Ebay. My aunt made the delicious chocolate pound cake for all of the adults.

Check out some of the great pictures of the adorable fairytale creatures from this adorable party.

Emma's costume was themed after Tinker Bell. Her "Team Tink" shirt was so adorable with her custom wings and tutu. 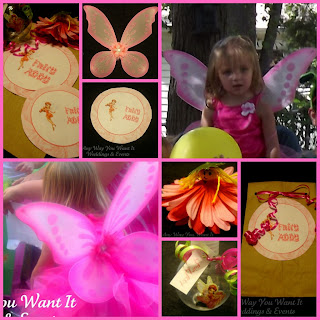 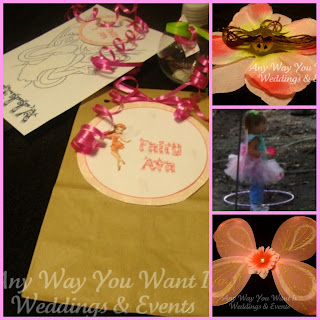 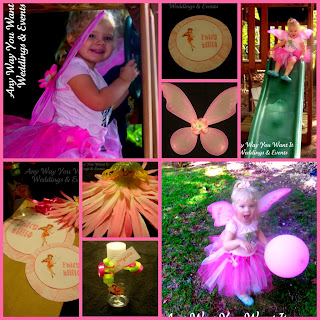 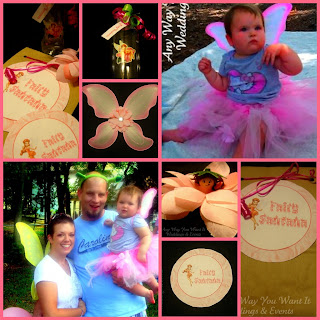 These pretty pink fairies were themed after garden fairy, Rosetta, from Disney's Tinker Bell. Check out the cute flower fairies that were given to each little girl. These were so simple to make but were such an adorable addition to the party. 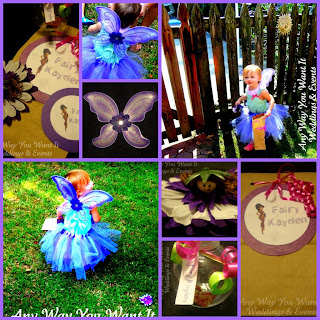 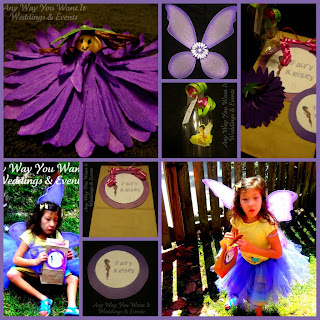 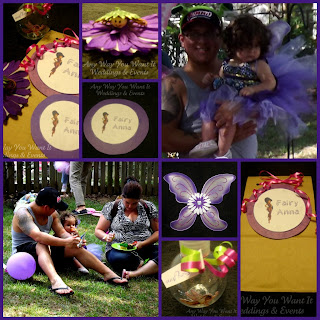 These precious purple fairies were themed after fast flying fairy, Vidia, from Disney's Tinker Bell. Check out the pixie dust jars that each girl received. I found these adorable bottles at Hobby Lobby. I added stickers that matched each girl's fairy, created a name tag, and added some cute ribbon. 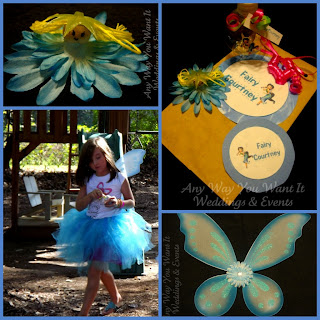 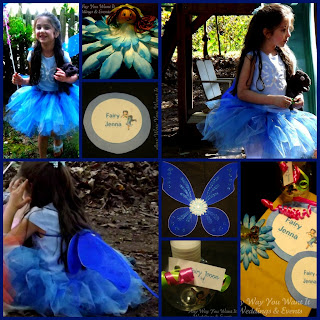 These beautiful blue fairies were themed after water fairy, Silvermist, from Disney's Tinker Bell. The favor bags given to each guest turned out much better than I expected. They were simply made from paper bags and I created labels for each kid. They were all packed full of lost things by the time the kids left. 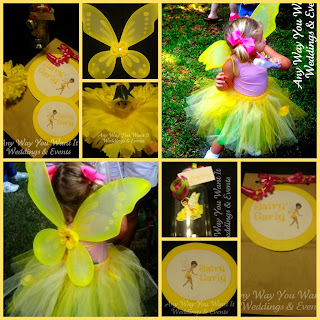 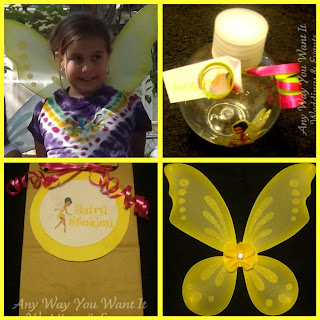 These adorable yellow fairies were themed after light fairy, Iridessa, from Disney's Tinker Bell. The fairy wings were one of my favorite parts of this party. I loved them so much that I'm seriously considering adding them to our website soon. 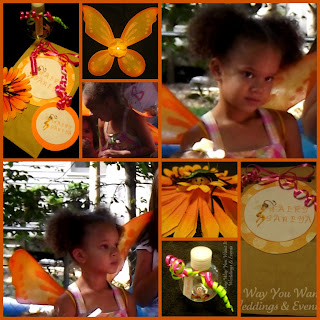 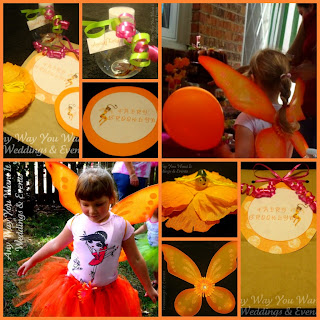 These outstanding orange fairies were themed after animal fairy, Fawn, from Disney's Tinker Bell. All of these little fairies were so adorable! 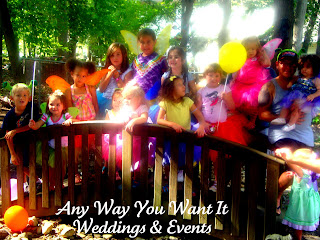 What a beautiful group of fairytale creatures!!

I had such a great time planning this party and I can't wait to see what this little cutie wants to do for her next party!

All photos are property of Any Way You Want It Weddings & Events.
Posted by Unknown at 1:01 PM

Welcome to Only The Young!!

Howdy do and welcome to my blog. I am the party planner and crafter behind Only The Young, a branch of my event planning business, Any Way You Want It Weddings & Events.

I specialize in unique events & parties galore! I love all things party and adore anything handmade. I enjoy blogging about my parties, my wonderful clients' parties, my partware, and all of my crafts.

I hope to inspire you to create unique parties of your own and to open yourself up to trying new things. Be bold and unafraid to make your own stuff! 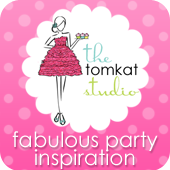